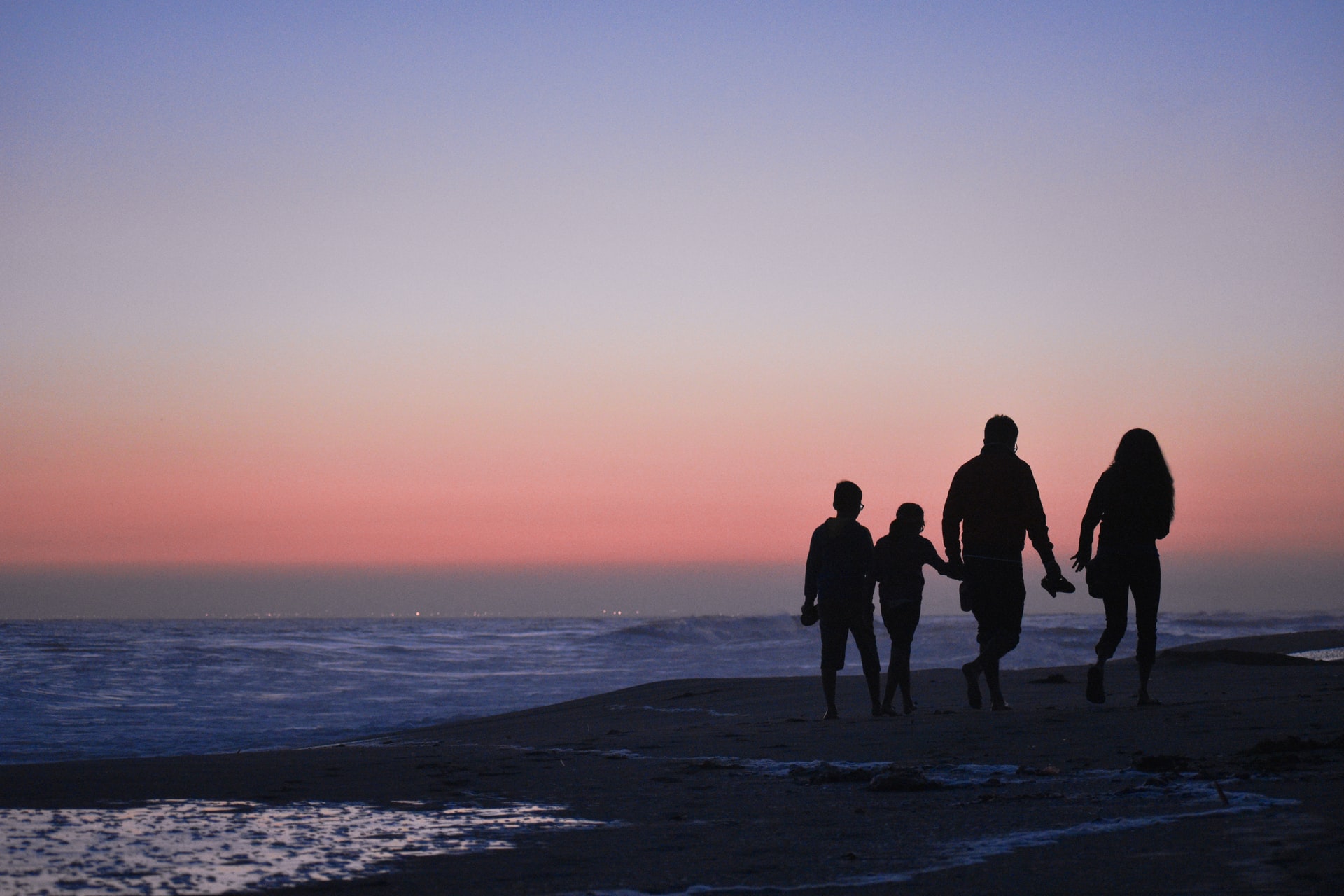 The Danger of Ordinance 31-21 to Parents and Families

West Lafayette Ordinance 31-21 raises questions about the role, authority, and wisdom of parental involvement with their children. The ordinance restricts parents’ ability to seek counsel for their children. Do the West Lafayette city councilors believe they are in a better position to tell a minor what advice they need than their own parents? The answer is clear in the ordinance. To make matters worse, this brief article will show that if the ordinance passes it is a small step from the current penalty of a fine to a family facing the possibility of a CHINS (child in need of services) case. This ordinance is designed to force parents, regardless of their own convictions, to provide a certain type of care and counsel for their children.

The ordinance, as written, is broad enough to include parents, grandparents, other family, and friends. This ordinance addresses unlicensed counselors and further defines them as “any person who provides counseling and psychotherapy” (Section 2.b, bold added). The ordinance also explains that counseling consists of “techniques used to help individuals learn how to solve problems and make decisions related to personal growth, vocational, family, and other interpersonal concerns” (Section 2.e). How is parenting NOT helping “individuals learn to solve problems” and “help [them]… make decisions related to personal growth, vocational, family and other interpersonal concerns”? The city councilors have not been honest with the public. Even if their personal intentions are not explicitly targeting parents (although one wonders the true identity of their targets … Christians? All religious people? Christian parents?), the law as written could easily include them. Lafayette Citizens for Freedom trusts neither the willingness of the West Lafayette councilors to explain their intentions, nor the people who will inevitably follow them in the future. As a parent to three children, I simply cannot imagine this level of government over-reach. The ordinance threatens all parents’ ability to help their children and take them to counselors of their choosing. If that were not bad enough, there is even more at stake for the entire family unit.

It is amazing that the government of West Lafayette, believes that they are in the position to dictate family conversations about human sexuality. According to the ordinance, parents can have “sexual-orientation-neutral” interventions, but cannot open their Bible to Genesis 1, Romans 1, 1 Corinthians 6 or a plethora of other biblical texts designed to teach children and teens how to think about and act in accordance with God’s design. The West Lafayette councilors might try to hide, as Councilor Sanders did during his brief comments at the public hearing on December 6, 2021 and say this is not really designed for parents. Lafayette Citizens for Freedom is suspicious. Our members do not trust the government to legislate family structure or conversations in the home. Even those families who are not committed to a Christian worldview should struggle that they are prevented from have clear conversations with their children about human sexuality unless it already agrees with the West Lafayette city councilors’ agenda. We wonder what other ways city council members might want to restrict parents. This is a serious case of governmental over-reach.

Section 4 of the ordinance states, “Any violation of this ordinance shall result in a fine of $1000. A separate offense shall be deemed committed on each day that a violation occurs or continues.” Every offense is $1000 and each conversation (on different days of course) represents a new offense. Maybe some parents in our community will need to start saving for a WL 31-21 ordinance fund rather than prepare their children for life through vocational or educational training. This is only one possible consequence.

As bad as this is, the end game for this ordinance is even worse. What is really at stake in this legislation is whether these parents will be deemed unfit to raise their own children. This ordinance could be used to rip apart families in our community. Please follow the logic.

We acknowledge some parents are so cruel and hurtful to their children that the law must intervene. That is why IC-31-34-1 of our state’s law code explains the “circumstances under which a child is a child in need of services.” Below is a copy of the state code that has relevance for West Lafayette’s ordinance:

Sec. 2. (a) A child is a child in need of services if before the child becomes eighteen (18) years of age:

(1) the child's physical or mental health is seriously endangered due to injury by the act or omission of the child's parent, guardian, or custodian; and

(2) the child needs care, treatment, or rehabilitation that:

(A) the child is not receiving; and

(B) is unlikely to be provided or accepted without the coercive intervention of the court.

If the WL ordinance were ratified, then a parent who speaks to their own child about human sexuality would not only be in violation of the ordinance and subject to a fine, but could also be guilty of endangering a child’s mental health according to state law IC 31-34-1-2. Ordinance 31-21 clearly states its purpose: “the City of West Lafayette, Indiana has a compelling interest in protecting the physical and psychological well-being of minors, including but not limited to lesbian, gay, bisexual, and transgender from exposure to the serious harms and risks caused by conversion therapy or reparative therapy by unlicensed persons” (bold for emphasis). It is not difficult to see the logical conclusion of the ordinance.

If the West Lafayette councilors were to empower the police department to confirm that a parent’s discussion of human sexuality violated 31-21, then it would be possible to prove that the parent also violated IC 21-34-1-2 opening that family to a potential CHINS case.

Lafayette Citizens for Freedom believes this is a logical example given the language of the ordinance. We also do not believe the WL councilors who say that this is not their intent.

Every parent and family in West Lafayette should see Ordinance 31-21 as dangerous. It is a frontal attack on parents’ rights to discuss human sexuality from their worldview and to take their children to pastor or religious counselor who shares their worldview. The ordinance also poses risks to nuclear families who may find themselves in a legal battle to keep custody of their children.

Lafayette Citizens for Freedom believes that ordinance 31-21 needs to be defeated. Furthermore, we are committed to put individuals on the city council who will focus on valuable legislation that promotes economic, religious, political, and social freedom. 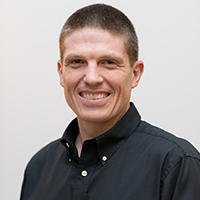 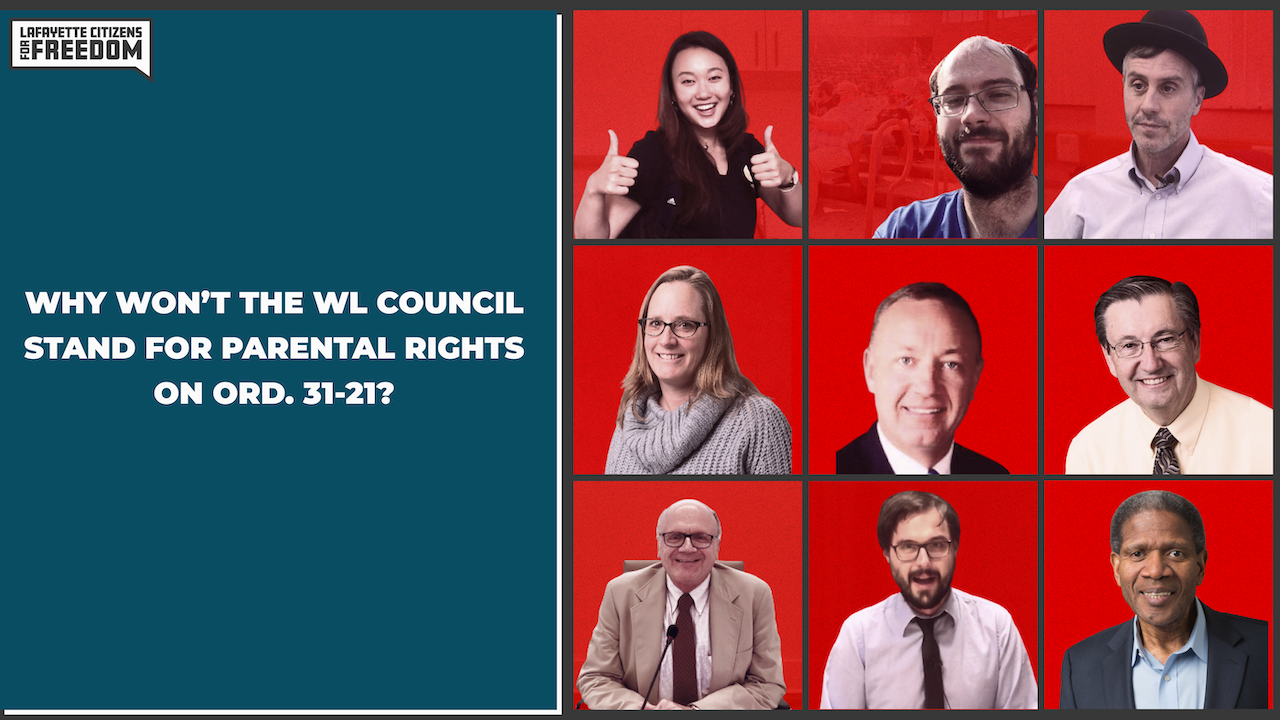 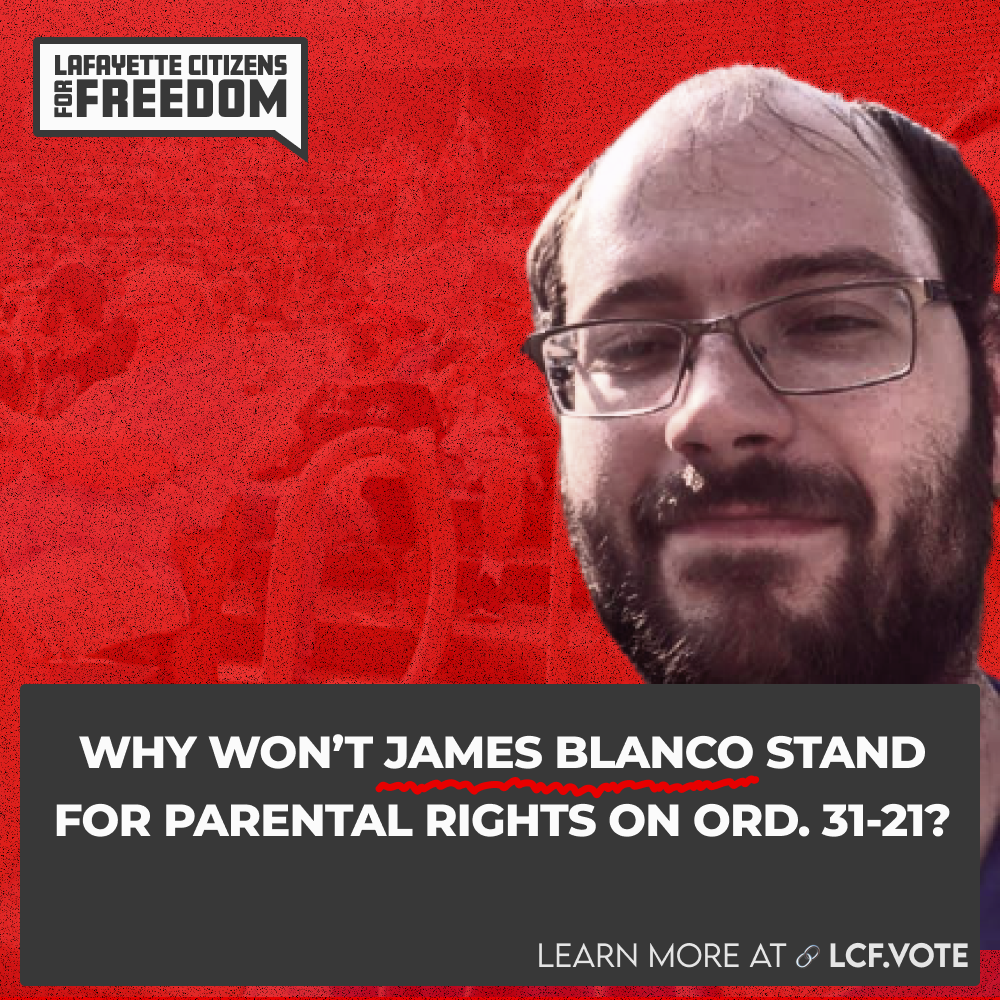 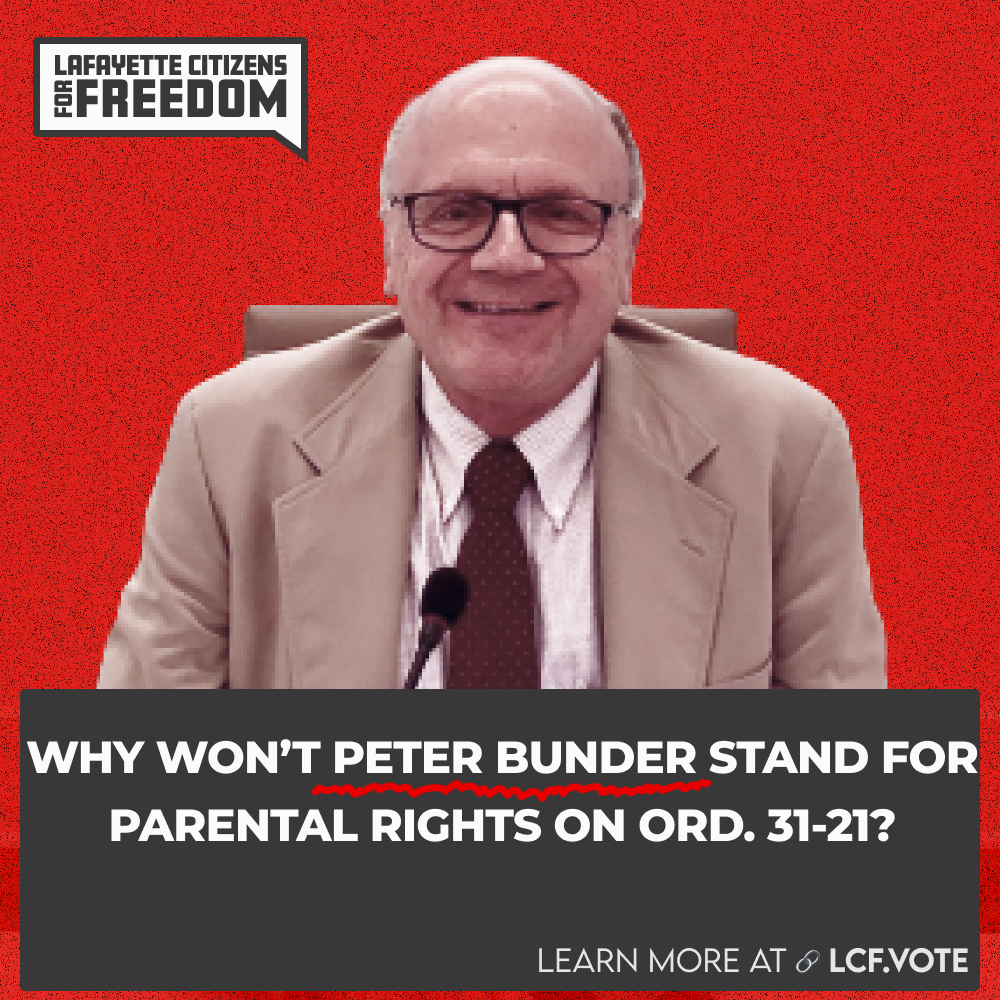 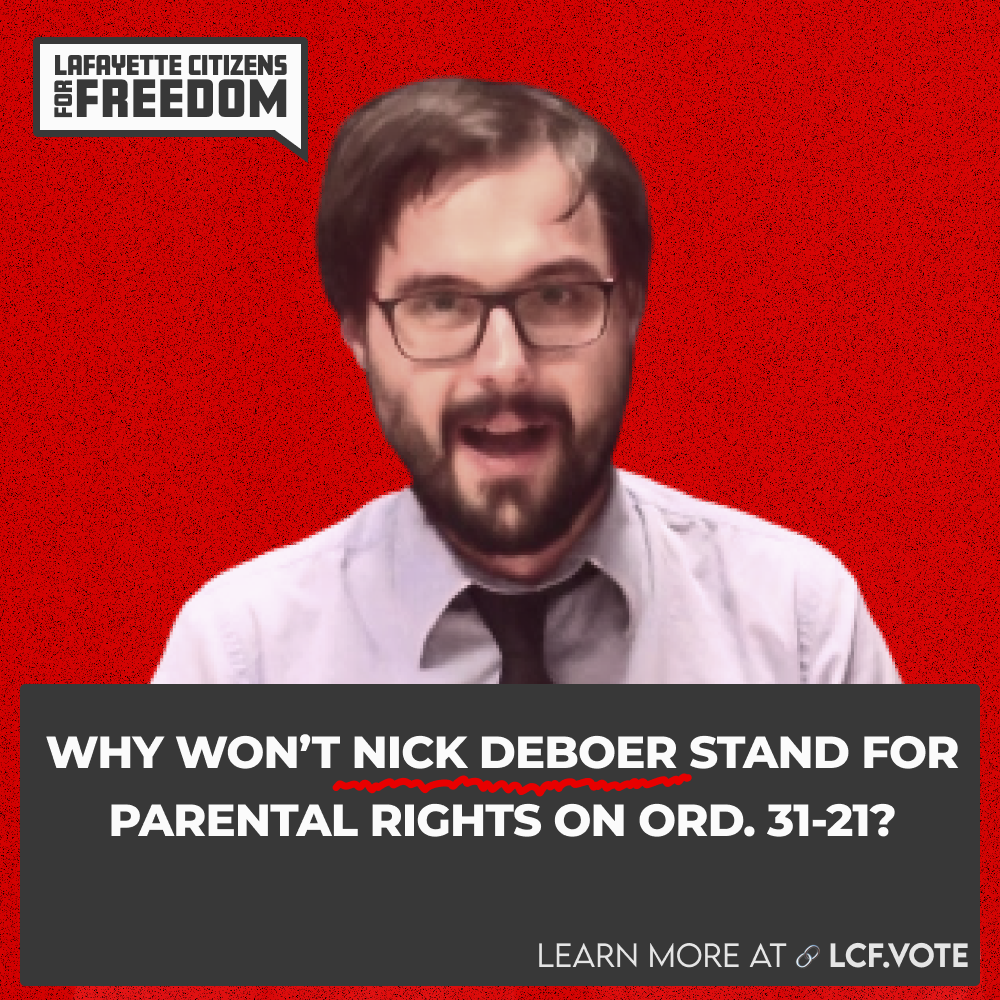 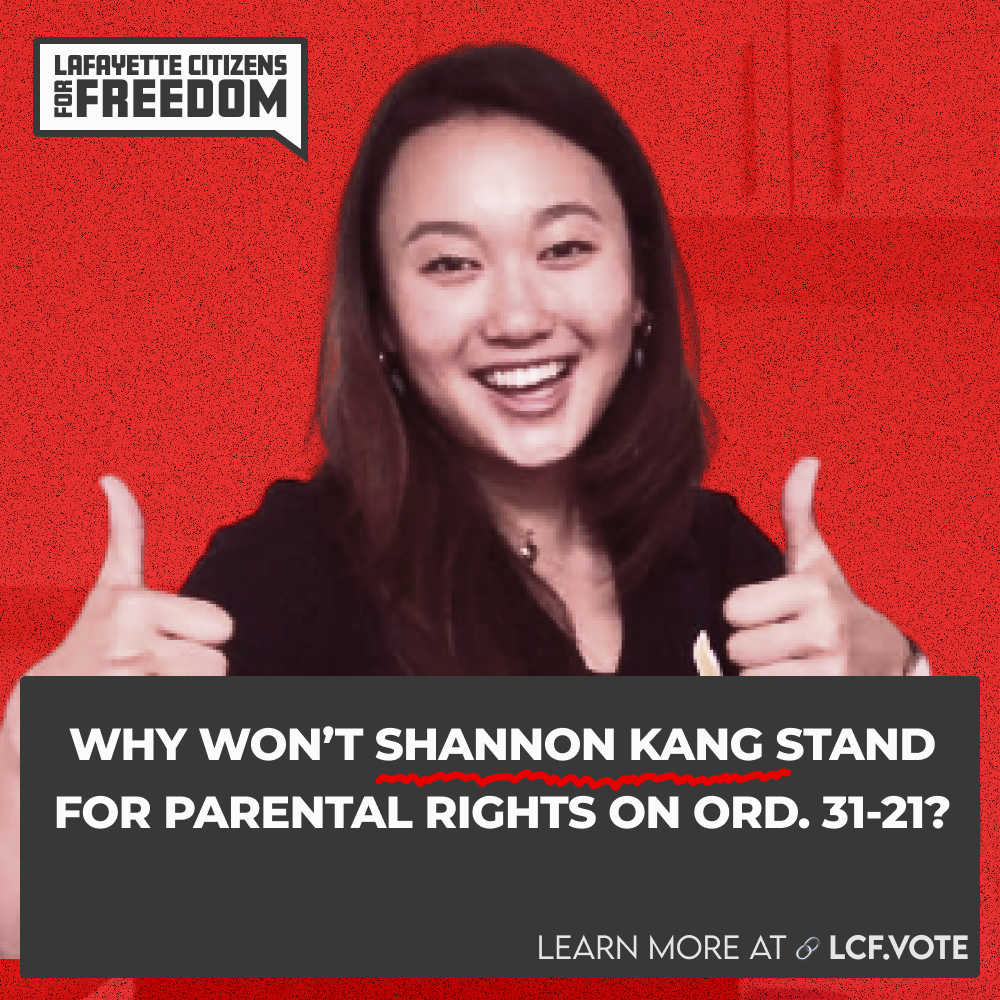 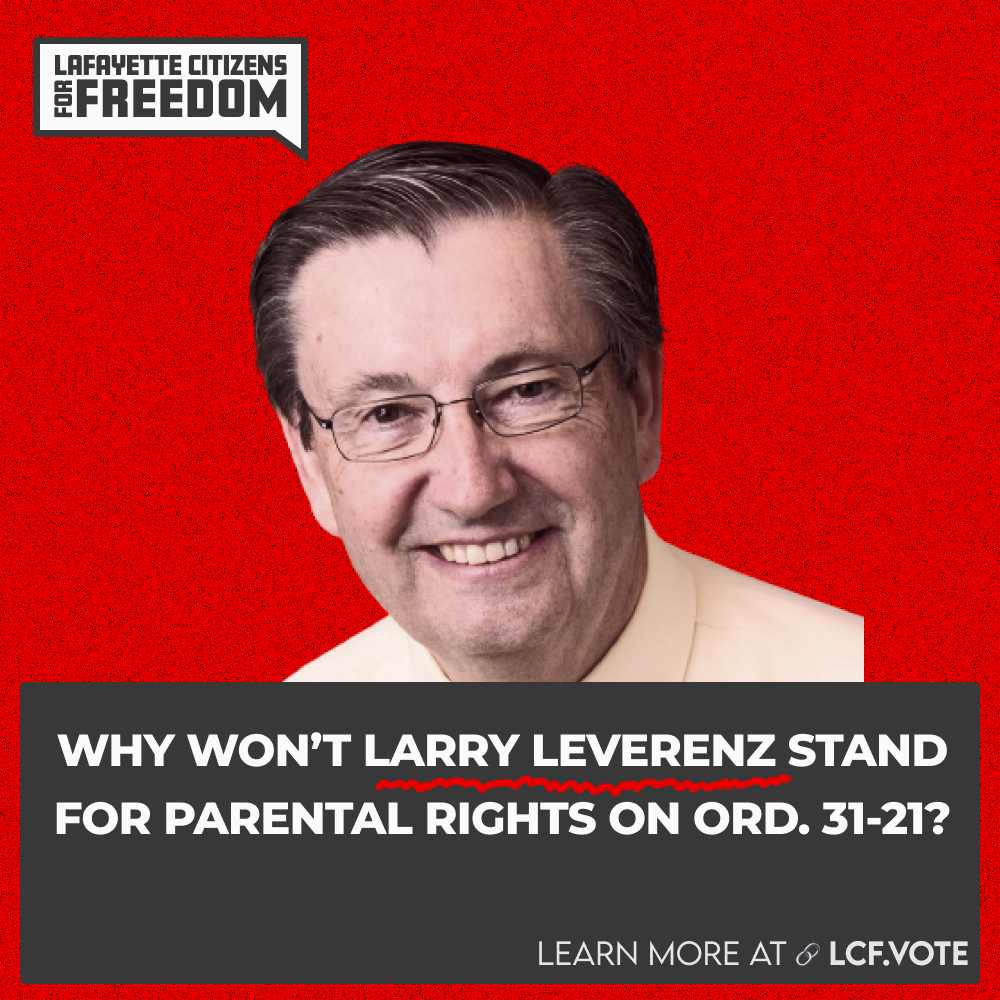 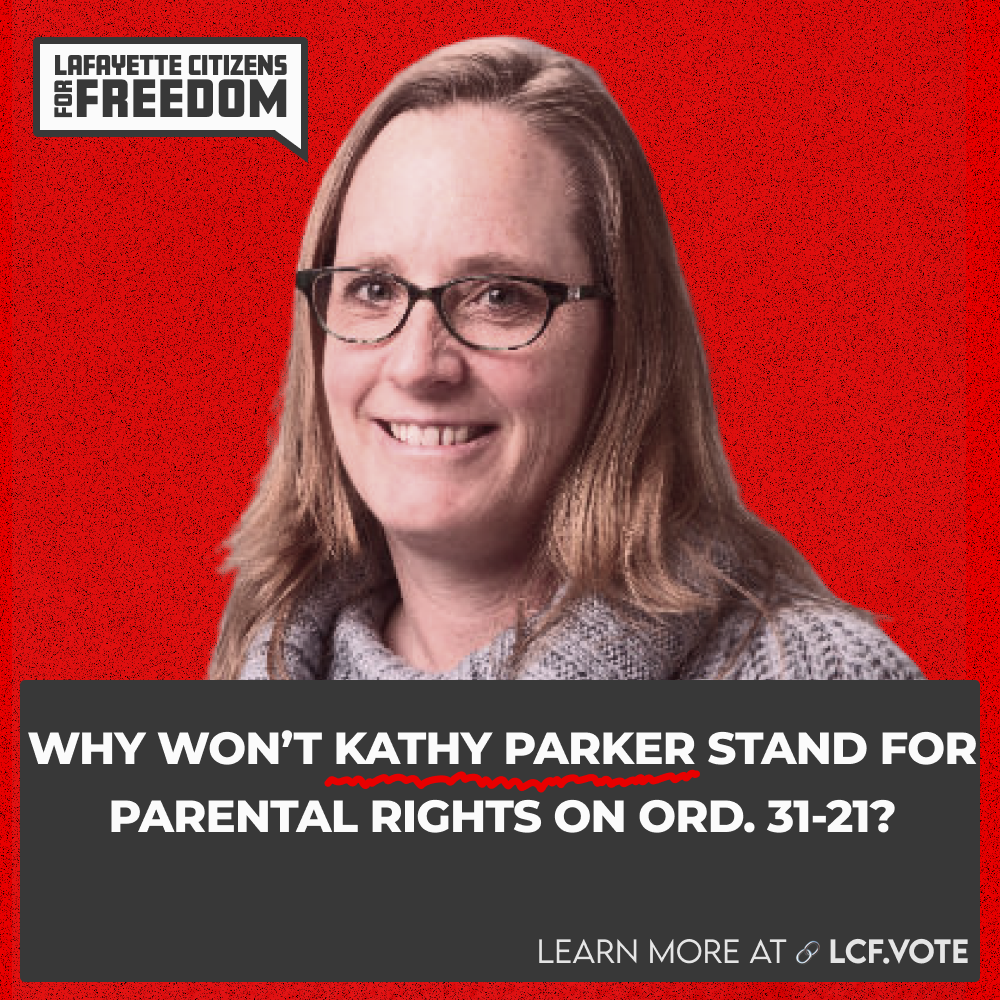 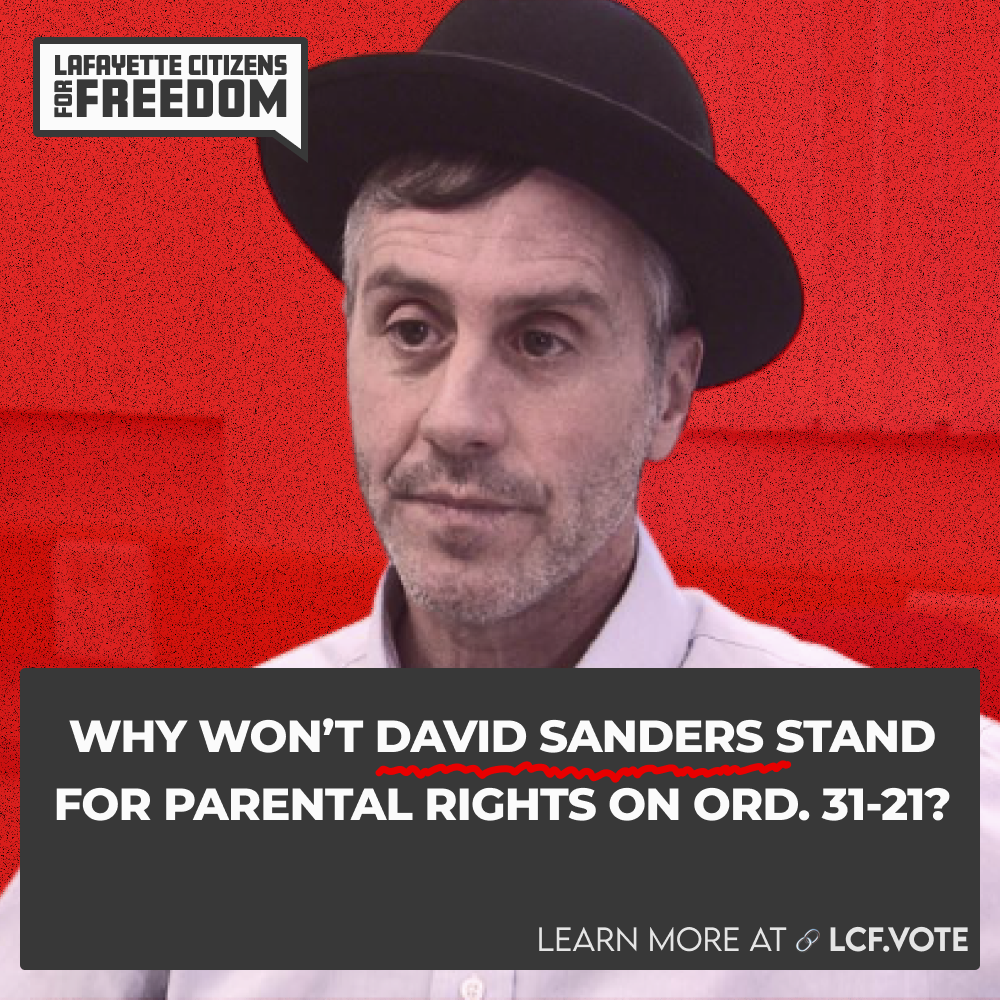